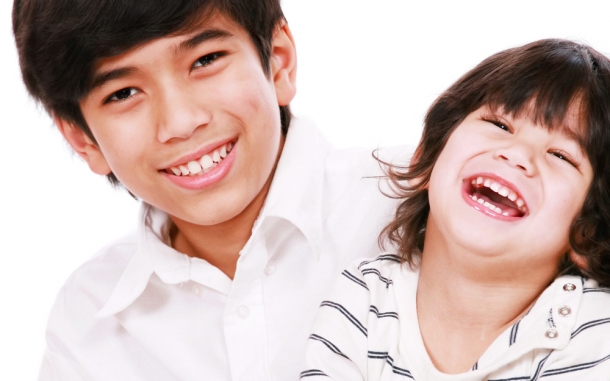 When I first began to grasp the immensity of Calvin’s disabilities one of my first worries were his three siblings. How would they feel connected with a brother that would never talk? Noah wanted a playmate and Calvin would never push cars in the sandbox with him or tease their sisters together. Would they ignore him? Would they get bored and disinterested because of his lack of response?

Three years later some of our worst fears have been realized. Calvin has no purposeful movement and is unable to communicate by switches or noises. However, our fears of our children (ages 5, 6 and 9) connecting with Calvin have been blown out of the water. Although not always perfect, they are fiercely protective, seek Calvin out and (most recently) drawing straws about whose turn it is to sleep with him at night.

I want to encourage those of you who are new on this journey. Maybe your child is non-verbal or has physical disabilities that prevent them from interacting with their siblings. Don’t give up hope! There are many unconventional ways to create bonds and nurture relationships between your kids. It takes creativity and you the parent are the expert in your home! Here’s a just a few tips that I hope are helpful.

1. Don’t reprimand your kids for expressing themselves about their sibling with special needs.

The first time our daughter yelled, “Yuck, he’s drooling on me!” my defensive hackles shot sky-high and I strongly reprimanded her. A friend (much farther along the path of raising a child with special needs) counselled me , “Let your kids express themselves to you. If they don’t express their frustration or anger to you they might force fake acceptance or take it out on the sibling with special needs. Encourage them to come to you.”

Today our kids feel free to come to us and share their angst about whatever is bothering them (drool, trach secretions, lack of response, etc.). Instead of correcting I empathise with them and then turn their perspective to look at things from Calvin’s point of view. Here’s a very real example:

Kiddo: Mom, I wish I had a little brother that could walk. I want someone to play with, all of Calvin’s toys are boring.

Me: I know, I bet you would love to play ball with Calvin, wouldn’t you? I bet more than anything Calvin would love that too. Hey, why don’t you put on those silly songs that you and Calvin love? He loves when you do that with him.”

Providing an outlet for the negative emotions (without wagging the finger) while simultaneously feeding in the positive perspective gives siblings the freedom to move on and build better relationships with their sibling.

2. Don’t remind (et nauseum) your kids of their differences.

Those are usually obvious and they’ll pick them up pretty quick without your help. Instead bridge the gap of differences by making the emphasis be on “family” rather than “individuals”. Of course each child (special needs or not) has individual needs that need your attention and love, but let the rhythm of your days be a more “whole family” perspective rather than a focus on a particular child. Find ways to relate and share common experiences. Emphasise your commitment and honour to one another.

One way we do this is by sharing about our day at the dinner-table. Each person tells a bit about their day and when we get to Calvin one of us fills in for him. Calvin loves it–I usually add a bit of humour to his story as I relate his day of therapy, school or doctor visits and tell funny details from a three-year-old’s point of view which make the other kids split with laughter. I’ll raise his hands with expression and move his hands to gesture. It’s the highlight of our dinnertime. Calvin just grins and enjoys all the attention while the kids feel a stronger connection to him and are more in touch with the details of his days.

3. Don’t guilt your kids into taking an interest in their sibling with special needs.

There is no better way to squash a sibling relationship than dumping loads of guilt or nagging onto it. Instead take the opposite approach, encourage and praise your kids when they do show kindness and involvement with their sibling with special needs. You can foster this attitude daily! I’ve found that once a child feels confident and proud of being a helper they want to do more! Pass on the attitude that it’s a privilege to care for their sibling even though it’s sometimes hard. Our oldest daughter once queasy from drool, now tells me when he needs to be suctioned, lets me know if anything seems off or will pop down and read books to him when he seems sad. And those are just a few ways she’s involved!

We’ve made it a fun privilege to take turns sleeping with their little brother. This morning I woke up and found Noah (6) reading books to Calvin and wiping his mouth. The next half hour he played his toy soldiers next to Calvin and occasionally set up army guys in Calvin’s hands. I have never asked him to do this but he’s taken an interest because he wants to.

Kid’s imaginations are wild, aren’t they? So many of their fears, hopes and ideas come out in their play (for young ones especially) or in writing and songs. The last few months we struggled along with Calvin in the ICU for months. Each night after a long day at the hospital we would tell a story, adding a chapter each time.

It started off with Noah beginning the story about four kids (who just happened to have the same names) in a magical land. Each night a different child told the next chapter and many nights I had tears in my eyes as we drove through the dark streets. Every chapter had the four kids interacting as if Calvin had no disabilities. He was saving them from creatures, scooping them up onto his magical horse and discovering magical playgrounds with them. Their thoughts of him were high and their love for him fierce in their stories. It blessed Darryl and I and filled their minds with joy even while Calvin literally lay a few steps from death. In the dark nights and hard times dream together as a family, create places of joy.

Kara is the official scribbler at EnRoute. Life is filled with extraordinary heartbreak and joy; I like to write about it and faith lessons learned along the way.