You're Not Poking a Hole in my Kid! From Refusal to begrudging Acceptance of a G Tube 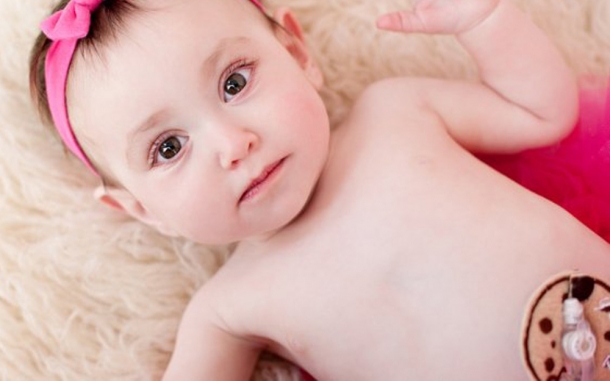 My son Blake had been inpatient for 12 days when we first heard he might need a feeding tube. The flu hit him hard, and at 22 months he had little reserve to fight back. The flurry of specialists had begun, and my sleep-deprived, hospital-to-work-to-hospital mind was spinning. “The team”–10 residents, attendings and everybody else–crowded in, ruining my first non-cafeteria dinner in a week.

They said the swallow study confirmed he was aspirating. I didn’t see anything wrong when the test was happening. “Pneumonia,” “preserve the lungs,” and “give him a rest,” were repeated over and over and over. They wanted to put an NG tube up his nose. I saw a slippery slope ahead of him, but I could not find an emergency brake.

The Emotions Of Feeding Tube Placement

When Blake was three months old, I knew he was not developing like his older brother, Daniel, but I never dreamed of the marathon ahead of us. The flu was the latest chapter of a story I was still struggling with.

I knew many children whose lives were better with a G tube, but Blake ate well and he loved the social interaction of mealtime. It was the only “normal” thing he could do, and now this team of mostly not-quite-yet doctors was taking that away. Every word they used felt like a veiled reference that he was dying: “options,” “quality,” “preserve.” My only personal experience with a feeding tube was with my grandmother, whose esophageal cancer left her unable to swallow.

After the team meeting, a long talk with Blake’s amazing nurse, and a night to sleep on it, I begrudgingly, reluctantly, and half-heartedly agreed to the NG tube. The first night it was in, Blake threw up so hard the tube came up. He was covered in thrown up, strawberry-flavoured formula and belly-laughing at his bid for “freedom.” Two weeks later he was discharged.

The “G” word was dropped constantly. I did not want to hear about a G tube. Agreeing to the NG was hard enough. Another swallow study in January showed only a very slight aspiration with liquids, so they let him eat soft solids and purees again. But the study also initiated G tube discussions once again.

I couldn’t hold it together. Doctors, nurses, and clinicians kept saying, “You’ll wish you did it sooner;”, “You’ll love it;” “I wish my kid had one.”, I could see what they were trying to do, but I couldn’t hear the message. Things are very different when something is a concept and when it’s your child laying in pre-op. I dragged my feet on a decision.

As a former reporter and self-professed word nerd, there is not a situation that leaves me at a loss for words. This was so different. I couldn’t articulate my pain, fear, anxiety, loss, confusion, and panic beyond, “It’s gross.” For the first time ever, words completely failed me.

I didn’t want it, even though I knew a G tube was best for him. It felt like a failure on every level–for Blake and for me. My resistance softened a bit when I was told it could be removed when it became unnecessary. I knew I would go through with it, but I had to get over myself and think of Blake.

I eventually scheduled the surgery—March 15—and when I hung up with the scheduler, I closed my office door and had a total and complete meltdown. I still didn’t want it. I still wanted to scream, “NO! STOP!” I still wanted to grab Blake and run far away, but I scheduled it.

In the weeks leading up to the surgery, I had the phone in my hand several times to call and cancel. I dialed the phone number four times. I felt like I couldn’t go through with it. Each time, I eventually put the phone down.

Four days before the surgery, Blake had a regular checkup with his ENT, who is one of my favourite doctors. Blake still had the NG tube, so the doctor asked about plans with it. I expressed my hesitations and I said I knew it was best for him, but that I had to get over my own feelings. I said I couldn’t explain it further than,”it’s gross.”. He said he is not a fan of trachs, but performs them frequently. “It’s not natural and it’s not the way it’s supposed to be.”

BINGO!! That was exactly how I was feeling. So beautifully simple, and yet it eluded me. “But,” he continued, “I do them because it is best for the patients. It makes their lives better.”. I exhaled.

The surgery went well. The G tube wasn’t nearly as Frankensteinish as I expected. It made my stomach turn for a while, but I got used to it. It wasn’t the constant hazard I was warned it would be. The long PEG tube didn’t catch on anything for the four months Blake had it. It healed beautifully, and a few months later, it was flipped out for a Mic-Key button.

Since this began in December 2012, Blake has grown eight inches and put on 12 very-needed pounds. The G tube has been good for him. When he is sick, I don’t have to panic that he is dehydrated. His medications have gone from a twice-daily, 45-minute struggle to get them down his throat, to about two minutes twice a day.

I, however, am still not a fan. It’s still not the way it’s supposed to be. But I have a respectful, working relationship with the G tube. It does its job and I do mine. It delivers his formula and meds. I keep it clean and the balloon filled. We are both working for Blake’s benefit.

In the past year I’ve move from outright disgust to begrudging acceptance. It was a tough journey. Perhaps in another year I will actually be a fan.