My Kids are on Screens All Day: Is that Okay? 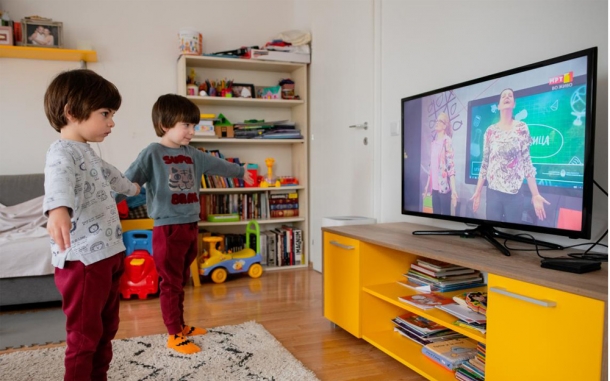 Screens are a double-edged sword — perhaps now more than ever.

Our children, learning at home amid lockdown orders, need Google Classroom and Zoom and iXL and the like. Orchestrating and policing this eLearning is a serious concern for half of parents, according to a survey of 3,500 ADDitude readers conducted in early April. Of equal concern is the amount of “non-academic” device usage sneaking its way into kids’ days; 47.93 percent of parents said they were “very concerned” about screen time gone haywire.

One reader said her child’s screen use leads to “fights and depression.” Still, the use of screens is practical and almost essential for many families today: “My kids are spending too much time on their electronic devices, but I need to do my job and stay as anxiety-free as possible,” wrote one parent. “When I remove the screens, the kids get bored and argue, which makes me anxious.”

This complicated and fraught relationship with screens was echoed on ADDitude’s Facebook page when we asked, “Is too much screen time even a thing right now?” Dozens of parents reported angry outbursts and defiance linked to gaming and spending time on digital devices. Others said they lack the parental bandwidth to worry about it: “I am raising four kids alone with no breaks 24/7,” wrote one mother. “I don’t have the emotional capacity to keep track of screen time right now.”

Still, other parents expressed gratitude. “Screens are a lifeline for my 14-year-old,” said one reader. ”Without them, she’d be totally devoid of her friends. It’s her entire social life right now. They play games, listen to music and have in-depth teenage conversations together.”

The Promise and Pain of Screen Time
All of this begs the questions: How should our screen rules change during a pandemic? Are there long-term repercussions for loosening the limits? What can parents realistically do to mitigate these risks while stuck at home? Screens are inevitable now; the question is not whether your child will use them, but how you’ll make the most of it.

Recognize digital media as a conduit to social play in strange times
Sheltering in place is especially hard for kids with ADHD, many of whom rely on regular sports and social activities to channel their energy. “They aren’t getting that now and may be using digital media to fill that extra time, distract them from a more negative mood, or because they’re bored,” says Jenny Radesky, M.D., a developmental behavioral pediatrician whose research focuses on family digital media use, child social-emotional development, and parent-child interactions.

Use media to fuel your child’s natural curiosity
“Since there’s no telling when this quarantine will end, point your children toward media that offers more than just gaming or chatting,” says Radesky who authored the American Academy of Pediatrics’ digital media guidelines for young children.1 “There’s an opportunity here to help them branch out in ways that are related and creative. My kids, for example, really like Tynker, an interactive learning platform that teaches computer coding. Kids who enjoy gaming might be interested in coding and graphic design.”

Randy Kulman, Ph.D., the founder, and president of LearningWorks for Kids, an educational technology company agrees and adds that digital media can be a healthy part of a “play diet” as long as it’s balanced with other technology that encourages physical activity or problem-solving offline. “If your kids enjoy cooking shows on YouTube, I recommend expanding their knowledge and kitchen skills with Toca Kitchen (an app) or Diner Dash (a video game).” There are even video games that can be used to improve social skills and strengthen executive functioning, Kulman says.

Make memories on their terms
“Many families are doing TikTokdances together — a playful digital platform that incorporates social media and physical activity,” Radesky explains. “Kids don’t always communicate their emotions clearly and sometimes we need to use play to bring that out.”

Still, today’s digital content is designed to be engagement prolonging. Features like autoplay that count down to the start of the next show, or game and app designs that use rewards and tokens, keep kids watching for prolonged periods of time and get them excited to reach the next level. This is one big reason why it’s so hard to walk away from screens, our experts explain.

“Consider games like Fortnite — if you turn off the game, you die in the game. Manufacturers have intentionally engineered them to be habit-forming,” Radesky says, explaining that weak executive functions in many kids with ADHD, anxiety, or high-functioning autism make impulse control challenging. “They also lack critical metacognitive skills that make them aware of their intense emotions.”

Platforms like Google Meets or Zoom lack this gamified design, which makes them more suitable for online learning and connecting with classmates. Kids don’t usually have trouble transitioning away from these platforms.

If you’re concerned that your children may be forming screen addictions, Kulman points to a careful analysis of data that suggests only a very small percentage of kids with ADHD — less than 3 percent — display signs of disordered video-game behaviour.2“Most kids who are moody and irritable after gaming don’t have an unhealthy relationship with games,” he explains. “Their irritability isn’t much different from that of highly competitive kids who love a sport and become irrationally upset when their team loses or underperforms. They care intensely about their video-game performance and get frustrated when they can’t finish what they started or don’t achieve the level they want.”

Q: “My son keeps himself occupied with video games all day while I am working from home. I make him take breaks for chores, exercise, and to get outdoors, but I’m concerned that all this extra time online may be harmful. Should I limit his screen time?”

A: Dr. Kulman
Screens are doing an important job during this crisis — they’re helping parents work from home by keeping kids distracted. Call it babysitting if you like, but we’re in survival mode. Screens are also providing some sanity for adults who feel stressed about finances and the future. If your kids are spending three hours playing Minecraft, that’s okay.

Keeping your family members healthy and helping them cope with related anxiety — yours and theirs — should be the priority now. Remember that, for many kids with ADHD, playing video games relieves stress.

It might help you to know that some research shows a positive link between video games and improved relationships with peers. The CDC is also encouraging people to use digital media during isolation. Nothing replaces in-person interaction, of course, but video chat and social media can help to ward off feelings of loneliness, strengthen friendships, and connect you to loved ones.

For a small percentage of kids, too much time online interferes with emotional regulation and social skills development. If yours is interacting with the family, keeping up with school work, sleeping well, and exercising, they are likely not in that group.

A: Dr. Radesky
Instead of limiting screens to a certain number of hours, carve out chunks for non-media activity. Go outside with a pet. Play a card or board game together. Watch a nature show or funny videos. Pillow fights and tickle contests are other great ways to have off-line fun.

A no-fail way to compete with screens is to give your kids your undivided attention for an hour every day. On weekdays from 4 to 5 p.m., my kids who are 6 and 10, know that I will not be distracted by work emails or texts. During that hour, we do whatever they want. Believe me, when kids know it’s mom time, it’s easy for them to close up their laptops.

I know we’re all very preoccupied with what’s going on in the world, but blocking out the news and focusing on the family is a terrific way to reduce stress for everyone.

Q: “What’s the best way to handle opposition when it’s time to transition away from screens?”

A: Radesky
If members of your family have had problematic gaming in the past, I recommend trying very hard not to loosen up on whatever limits you’ve placed on them in the past. Instead, meet as a family and decide what else they can do during their extra time. Maybe it’s reading a comic book or video chatting with friends or building a robot.

The pandemic is a new situation for everyone. Take the approach that, ‘Hey, we’re all stuck in this together, so we may as well make the most of it and figure out how to have fun while we’re getting through it.’ Resourcefulness and ingenuity are important to model for your kids right now.

Work to expand their interests away from video games, but keep in mind that if you push too hard or too fast, they may refuse. Give them some time. Don’t guilt-trip them into joining you and don’t be disappointed when they don’t. Keep trying and keep supporting them. Once you get your child to open up and have fun, they’ll be more likely to join you next time.

Q: “What can I do in the moment of an intense reaction to ending screen time?”

A: Radesky
Step one is to be as calm as possible. If we reflect back intense emotion, it scares the child and sends the message that no one can handle him — not even his parents. The child knows he needs his parents to help him regain control, so freaking out is the opposite of reassuring.

Some children see “power” in their negative behaviour. When you lose it, they’re getting your attention — negative attention is still attention, after all — and it reinforces the unacceptable behavior.

An approach called the Zones of Regulation can help your kids become more aware of their emotions and help you assess them. There are four zones — green for happy and calm; blue for sleepy, bored, or relaxed; yellow signals caution and warns of intensity ahead; red is anger and frustration that is out of control.

When kids are in a red zone, it’s a mistake to engage them because their heads are in a disorganized place. They aren’t thinking straight and need a safe place to calm down. Talk about it beforehand and make sure they understand that, when they’re in a red zone, they will be told to go to a designated place to calm down. (A tent in the bedroom or a bean bag chair with books they like, for example.) Of course, this is easier with younger kids.

When a teen becomes violent, leave the room to keep yourself safe and to defuse the situation. Let them know you are there to support them once they calm down.

Use privileges and consequences to discourage big emotions and help your child self-regulate.

Challenge them to show you they have control over their media use. If they can turn off the game (or allow you to do it) without whining or complaining, they will earn the same amount of screen time the next day. If not, there will be less or very limited screen time the next day… This will be more difficult for some kids than others, but it’s worth trying. And the more you repeat it, the more normal the process it becomes.

Working with a therapist is necessary in some cases for children who are extremely resistant to change.