I Broke: I'll Never Forgive Myself for Hitting My Autistic Son. 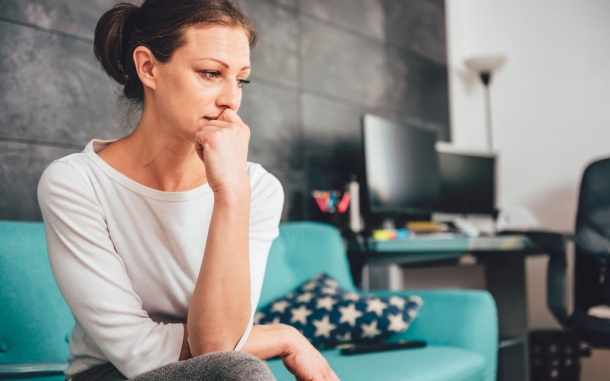 I’m on the floor of the bathroom with my fingers in my ears. I’m not sure it was even necessary as I wouldn’t be able to hear the cries of my child over the cries of my own. I’m crying so hard that my body has started to shake with exhaustion, and I’m sweaty from the exertion.

In the other room Casey screams from his car seat that I ripped from the car to buckle him in because I did not know what else to do. He’s safe. Safe from himself, and so much worse, safe from me.

I hit him. I hit my six-year-old autistic son.

This was two years ago.

It had never happened before and it has never happened since (and I feel a need to explain that it was opened handed and did not leave a mark... but it was so beyond wrong). I can give you every reason as to what brought me to this point: I hadn’t slept for days because Abby had pneumonia, that this had been the third day in a row that I had to pick up Casey early from school because he was “a danger to himself and the other children in the classroom” and there was “nothing more they can do,” or that he had been screaming at that point for three hours, and in that time, he had bitten, kicked, punched, and thrown chairs and shoes at me and both of his brothers -- and was then threatening to hurt his baby sister. But you know what? Nothing I can say could justify my actions there. I didn’t hit the school, the pneumonia, or the the part of his autism that makes him rage. I hit my son. My beautiful boy.

It kills me to put this out in the public. It kills me to relive this day. My heart still aches at the thought of causing harm to my beautiful little boy. So then, why am I telling you this? Because I think this is a conversation that is important. We as parents of children with autism feel a need to be “super parents.” I felt a need to fit myself into a mold that I thought a special needs parent should fit. I didn’t ask for help because I was terrified of telling someone that I couldn’t handle what was on my plate. I wanted to look the part, and even more so, I wanted to FEEL the part. I had a lot of people telling me how great I was based simply on the diagnoses of my children. I wanted to live up to what I thought I should be. In so doing, I had run myself ragged, was overwhelmed, overtired and pushed beyond my limit.

Parents of special needs kids are just simply parents. We aren’t endowed by God with any super powers outside of those that “regular” parents have. I’ve always felt like I wasn’t “allowed” to complain about even the regular things that happened with my special needs kids. I couldn’t say that I was sick to death of potty training with Casey because I’d get that look that says, “You’re not supposed to complain about your autistic son! He can’t help it!” If regular parents can, why can’t I? I’ve said it a lot that special kids don’t go to special parents, and I am proof of this. I’m no better than any other parent with any other kid. I was trying to shove myself into an impossible mould that no real parent can fit in.

And then I broke the mould. (Yeah right. But I’m trying.)

After that incident I fully realized how not special I am. It was a tough lesson to find myself in a situation I had never even IMAGINED myself being in. The thought of hurting my kids had never even crossed my mind. I’m not that parent. It pushed me to the point where I knew I had to ask for help. I knew I could never get that far gone again, and so in the effort, I had to give up on being the person I thought I should be and just be a better version of who I am.

And in cases like mine, we need therapy and good antidepressants. We need to be able to talk about the reality that we are faced with. We need to not be judged any more than any other parent when we have crappy days and say we hate motherhood. We are regular parents in irregular situations. We need to do this OUR WAY and not be judged for doing/not doing what other parents of kids with the same diagnoses are doing. We need acceptance of not only our children, but of us, the parents.

There’s a tendency within some special needs parents to make the picture of raising a child with special needs much rosier than it is. I’m not saying that it’s not SO GOOD. It is. But it also can be SO HARD. I have promised to be honest about the good and bad in this blog, not just for you readers, but for me. This is why I’m telling you this. Admitting I hit Casey is super hard. I’m afraid of the judgment. I’m afraid of hearing, “Well, I’d never get to that point!” I never thought I would, either. But if we can’t talk about the hard parts, we aren’t giving others the permission to do the same. And we need to be able to talk about it.

And I’m not saying it needs to be done in a public forum, either. I am saying is that if you are having a tough time you NEED to talk about it. You NEED to seek help. Go online or go to a therapist. Just talk about it. Get it out so you can deal with it and move on. There’s nothing worse than letting it build inside.

There is nothing that justifies hurting your child. Let me make this clear. There is no pain or exhaustion or stress that can / should ever amount to what I did. And I can assure you, the ramifications in my own life are still ongoing. I have not yet come to a place where my insides don’t want to fall out at just the thought of that day. I don’t know if I’ll ever forgive myself for it, and I’m pretty sure that is just. I need to remember.

I wish I had better answers for moms looking for help outside of just talking about it. I spoke to a couple of other friends who also have children with autism today about this very thing. Having a support system, at home and online is fantastic. Outside of the online world though, where does one go to get help?