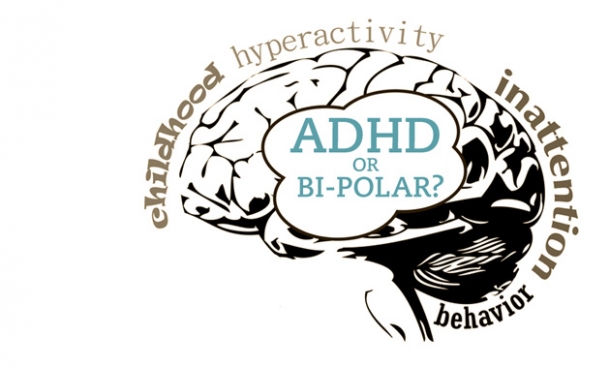 Both disorders share many characteristics: impulsivity, inattention, hyperactivity, physical energy, behavioural and emotional lability (behaviour and emotions change frequently), frequent coexistence of conduct disorder and oppositional defiant disorder, and learning problems. Motor restlessness during sleep may be seen in both (children who are bipolar are physically restless at night when “high or manic”,though they may have little physical motion during sleep when “low or depressed”). Family histories in both conditions often include mood disorder. Psychostimulants or antidepressants can help in both disorders (that is, depending on the phase of the bipolar disorder). In view of the similarities, it is not surprising that the disorders are hard to tell apart.

So what features can help in distinguishing these two disorders? Some distinctions are obvious.

The duration and intensity of angry outbursts and temper tantrums in the two disorders differs.
Children who are ADHD usually calm down within 20-30 minutes, whereas children who are bipolar may continue to feel and act angry for over 30 minutes and even for 2-4 hours. The physical energy that a child with ADHD “puts out” during an outburst of anger could be mimicked by an adult who tries to “enact” the tantrum, whereas the energy generated by angry children who are bipolar could not be imitated by most adults without reaching exhaustion within a few minutes.

The degree of “regression” during angry episodes is typically more severe for children who are bipolar.
It is rare to see an angry child who is ADHD display disorganized thinking, language, and body position, all of which may be seen in angry bipolar children during a tantrum. Children who are bipolar may also lose memory of the tantrum.

The “trigger” for temper tantrums is also different in these disorders.
Children who are ADHD are typically triggered by sensory and affective overstimulation (transitions, insults), whereas children who are bipolar typically react to limitsetting (i.e., a parental “NO”) and conflict with authority figures. A child who is bipolar will often actively seek this conflict with authority.

The moods of children who have ADHD or bipolar disorder may change quickly, but children with ADHD do not generally show dysphoria (depression) as a predominant symptom.
Irritability is particularly prominent in children who are bipolar, especially in the morning on arousal. Children with ADHD tend to arouse quickly and attain alertness within minutes, but children with mood disorders may show overly slow arousal (including several hours of irritability or dysphoria, fuzzy thinking or “cobwebs”, and somatic complaints such as stomach aches and headaches) upon awakening in the morning.

Sleep symptoms in children who are bipolar include severe nightmares (explicit gore, bodily mutilation).
Additional information on the specific content of these dreams and why children do not freely reveal these dreams is available in another article by Charles Popper (Diagnostic Gore in Children’s Nightmares). Children who are ADHD mainly show difficulty going to sleep, whereas children who are bipolar are more apt to have multiple awakenings each night or have fears of going to sleep (both of which may be related to the dream content described above).

The misbehaviour of children who are ADHD is often accidental.
If they crash into a wall (or a limit or an authority figure), it is often due to oblivious inattentiveness. The child who is bipolar, in the other hand, is more likely to crash into a wall with intent, for the sake of challenging its presence, Children who are bipolar are highly aware of “the wall” and are sensitive to ways of creating the biggest feeling of impact or challenge to it.

In the child who is bipolar, danger-seeking grandiosity, energized giggling, and sexual hyperawareness may be seen early in the preschool years, and persist into adolescence and adulthood.

The natural course of ADHD is chronic and continuous, but tends toward improvement.
There may be periods of worsening, however, during situational or developmental stress, or if a coexisting conduct disorder worsens. Children with bipolar disorder may or may not show clear behavioural episodes or cycles, but they do tend to exhibit increasingly more severe or dramatic symptoms over the course of years, particularly as the child becomes larger and the impulsivity becomes more difficult to contain.

Children with ADHD do not exhibit psychotic (thoughts and behaviour reveal a loss of contact with reality) symptoms unless thy have coexisting psychotic depression, preschizophrenia, a drug-induced psychosis, a psychotic grief reaction. Children with bipolar disorder may, on the other hand, exhibit gross distortions in perceiving reality or in interpreting affective (emotional) events. They may even exhibit paranoid-like thinking or openly sadistic impulses.

Lithium treatment generally improves bipolar disorder but has no or little effect on ADHD.

The Coexistence of ADHD and Bipolar Disorder

There is concern that ADHD is being overdiagnosed and bipolar disorder underdiagnosed in the population of children.

Original article can be found here: