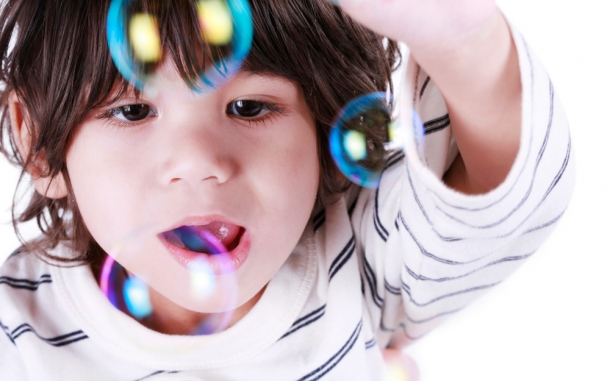 Stress is a factor we’ve come to accept as part of our modern-day society. As adults, we generally recognize situations that cause stress in our lives and develop strategies for dealing with it, such as exercise, meditation and relaxation techniques.

Young children, however, typically are unable to recognize situations that cause stress in their lives, nor are they equipped to deal with stress in positive and productive ways. Instead, they often exhibit stress and anxiety in physical and emotional outbursts. Sometimes stress can lead to a tic— a sudden, repetitive, non-rhythmic movement involving a distinct muscle group—like an uncontrolled eye blinking.

Surprisingly, tics are fairly common among kids. In fact, up to 24 percent of children may have a tic at some point in their young lives. This ailment is referred to as Transient Tic Disorder, and it is very common.

Blinking, Grunting and Jerking
Facial tics, like an eye blink, represent only one type of tic. Others include hand-clapping; neck stretching; mouth movements; head, arm or leg jerks; and facial grimacing. Sometimes tics can be in the form of an audible sound, like throat clearing, sniffing, or grunting.

It’s important for parents to understand that children cannot consciously suppress a tic. Once children begin to think about it, holding in a tic is as hard as holding in a sneeze or a yawn.

Tics are rarely diagnosed before the age of 2 and can begin anytime during childhood. Boys are three to four times more likely to develop a tic than girls. Generally, tics come on slowly, last for a few weeks or up to a year and then regress again.

In rare cases, a tic may be the symptom of a more complicated condition. During my residency, a young girl was admitted to our hospital because she had been acting strangely. After a battery of tests, the neurologist began to discuss with us an autoimmune condition called PANDAS — a rare disorder, where children develop changes in personality and tics several weeks after a Streptococcal throat infection. Tics related to this condition come on much more suddenly and gradually improve. Often, but not always, penicillin is given for the Streptococcal infection and children typically do quite well when given this treatment.

When a child develops a tic, a parent inevitably begins to wonder, “Will my child develop Tourette’s Syndrome?” The answer is: very rarely. While having a transient tic is common, Tourette’s is not. In general terms, Tourette’s involves multiple tics, at least one is vocal, and symptoms must be present for one year. For children with Tourette’s, there are many medication and therapy options that may help decrease symptoms.

Ignoring the Behaviour, Minimizing the Pressure
Once the doctor concludes there is nothing physically wrong with your child, it is best to simply ignore the tic. The best thing a parent can do is not to draw unnecessary attention to a child’s tic.

Some parents ask if children aren’t more likely to stop a behaviour if they’re made aware of it. While it’s true children need to be taught proper behaviour in many situations, drawing attention to a tic causes a child to think more about it, which inevitably worsens the condition.

Besides just ignoring a tic, helping to minimize children’s stress also is key
It may be hard to imagine, but children face a great deal of kid-size pressure in their lives. Think back to those days in school — dealing with homework, social interactions and deadlines can be tough on youngsters.Home life can be another source of stress for children, especially during times of family turmoil and trials. Spending time with your kids and talking with them about their concerns can help lighten the load. Ensuring children are getting adequate sleep goes a long way toward eliminating stress.

For the most part, tics are harmless, and the vast majority of tics are not the result of any underlying problem. Once the doctor gives your child a clean bill of health, the best thing to do is just ignore the tic, help minimize stress and make sure your child is getting enough sleep. These are the best measures to help your child deal with a problem that will most likely disappear in a short time.

"I enjoy the full spectrum of pediatric medicine, from helping parents make the right choices for their new baby to handling sports injuries in adolescence. I am especially pleased to be joining such a fantastic group of pediatricians and look forward to caring for families in and around Princeton." Dr. Toohey maintains an active interest in patient education, authoring hundreds of articles on common pediatric topics and providing quick references for parents in mobile format. Dr. Toohey is married with three small children. He and his wife enjoy spending time with their children, getting outside and staying active.