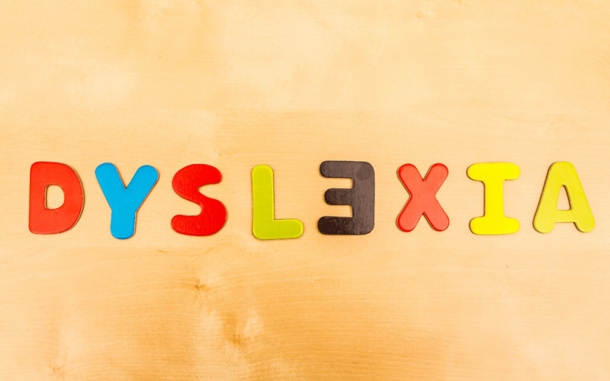 There are several types of dyslexia (or learning disabilities) that can affect the child’s ability to spell as well as read. The types are identified by the nature of the problem within the central nervous system or brain.

usually occurs after some form of brain trauma or injury to the area of the brain that controls reading and writing. It is a permanent brain injury rarely seen in today’s school age population because it results from severe head injuries.

is a dysfunction of, rather than damage to, the left side of the brain (cerebral cortex) and does not change with age. Individuals with this type of dyslexia are rarely able to read above a fourth-grade level and may struggle with reading, spelling, and writing as adults. Primary dyslexia is passed in family lines through their genes (hereditary). It is found more often in boys than in girls.

• Secondary or developmental types of dyslexia

is felt to be caused by hormonal development or malnutrition during the early stages of fetal development. Poor parenting, abuse, neglect, and/or poor nutrition during the developmental years 0 to 5 are also known causes. Developmental dyslexia diminishes as the child matures. It is also more common in boys. This type of dyslexia is most often found in special education classes. It is this category of dyslexia or learning disability that responds best to the classroom accommodations and modifications found in special education classrooms that assist the child with learning while his nervous system continues to develop.

is the term used for the specific learning disability termed visual processing disorder. This form of dyslexia is the result of immature development of not only the eyes, but also the whole process that gets information from the eyes to the brain.

refers to the specific learning disability termed auditory processing, or the more severe condition termed Auditory Processing Disorder (OPD). This form of dyslexia involves difficulty with sounds of letters or groups of letters. When this form of dyslexia is present, the sounds are perceived as jumbled or not heard correctly. And just as with visual processing, the brain correctly interprets information that it correctly received.

refers to the learning disability term sensor-motor integration and is a widely pervasive motor condition characterized by impairment or immaturity of the organization of movement, with associated problems of language, perception and thought. Typically, the child in question may be seen to be clumsy and poorly coordinated.

The term dyspraxia is separated into “true dyspraxia” a lifelong condition that responds to some degree to consistent, early, and structured intervention; and “developmental dyspraxia” a matter of neurological immaturity, a delay rather than a deficit that can be resolved over time with appropriate treatment. The problem is that only time determines the difference.

is the term given to the most significant educational effects of the condition and refers to an inability to hold or control a pencil so that the correct markings can be made on paper. These symptoms are most commonly seen as poor letter formation in printing, or as poor cursive handwriting skills. As a specific learning disability these symptoms would be identified as immature fine motor development.

is a lesser-known disability, similar and potentially related to dyslexia and developmental dyspraxia. The term refers to an impairment of the ability to solve mathematical problems, usually resulting from brain dysfunction. It occurs in people across the whole IQ range, and sufferers often, also have difficulties with time, measurement, and spatial reasoning.

Although some researchers believe that dyscalculia necessarily implies mathematical reasoning difficulties as well as difficulties with arithmetic operations, there is evidence that an individual might not be able to manipulate the numerals in addition, subtraction, multiplication and division (or dyscalculia), with no impairment of, or even giftedness in, abstract mathematical reasoning abilities.

Dyscalculia can be detected at a young age and measures can be taken to ease the problems faced by younger students in the same way that dyslexia can be dealt with by using a slightly different approach to teaching. However, dyscalculia is the lesser known of these learning disorders and so is often not recognized.

Before any treatment is started, an evaluation must be done to determine the specific type of dyslexia. While there are many theories about successful treatment there is no actual cure. There are, however, many techniques for helping the child to learn.

Perhaps the most important aspect of any treatment plan for dyslexia is attitude. If the parents avoid the tendency to label their children, and maintain a positive attitude, the child will be influenced by the attitudes of the adults. As a consequence, problems with self-esteem, depression and other emotional concerns that usually accompany dyslexia will become less of a problem.

Etta Brown, holds a Masters in Special Education, and received the Educational Specialist at Kent State University with studies in School Administration, and a major in School Psychology. During twenty years of professional experience in the public schools in Ohio, Iowa and California she has worked as a special education teacher, a school social worker and as a school psychologist. Since retirement, she has continued to reach out to parents and students through her writing.