Why’s he so slow? 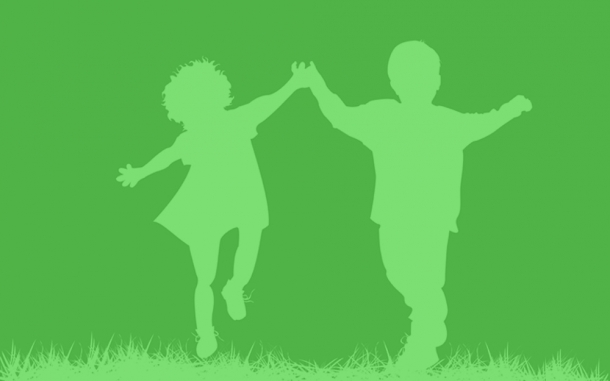 Picture a small girl, black bangs thick across her forehead, bending over her little brother. He is trying to learn a simple task, and she patiently models it for him again and again, slowly and carefully.

“Here is the church, and here is the steeple. Come on, put your fingers together. Like this.”

He tries each time to imitate her motion, and each time he stops short. Here is the church. With determination, he laces his fingers together, moving at the pace of molasses on a winter’s day. Here is the steeple. She tugs gently on his index fingers, and his hands release so the shape is lost. She encourages him cheerfully: “Try it again, Ben. One more time. You can do it!”

Finally it seems that he cannot do it. After repeated tries, he has not been able to make the steeple appear at the same time as the church. His hands are like wet clay; she moulds them into the correct shape, but as soon as she lets go, his fingers collapse into an indistinct heap. His tongue lolls out in concentration and she hates the way he looks. She uses her finger to push his tongue gently back into his mouth, but it always lolls out again within seconds. She tries holding his lips together so the tongue won’t escape, but she knows it will re-emerge as soon as she turns her back. He sits there, limp, good-natured, trying so hard to please her, but he cannot do the task she is trying to teach him. He’s like a baby made of dough.

She runs to her parents in tears. “Why’s he so slow? What’s the matter with him? He just won’t learn!” They exchange glances. Father takes her in his lap, gently. Mother sits nearby. She says nothing, but her eyes are worried. For once they seem to have forgotten about her brother; they leave him alone in the other room. Father starts to speak, slowly and carefully, measuring his words, weighing them before placing them in the air. “When your mother and I found out we were expecting a baby, we were so happy. That baby was you! Mother gave you the best of her talents. She gave you her musical talent so you would be a good musician. Father gave you the best of his talents. We wanted you to be a smart baby. So we gave you the best of what we had. So you were born and we were so happy to see you.”

The small girl nods. She imagines her parents with a big bag of goodies, like the bright red stocking that holds candies and toys on Christmas morning. They are sorting through the toys picking the very best ones for her.

Father looks at her, and continues. “Well, then we had a little surprise. We found out another baby was coming. We did not know he was coming. So, we looked at what we had left. We gave him a good sense of humour, a beautiful smile. But we did not have as many talents left for him, because we had already given them to you. This is why you must be a good sister. Your brother is slow, and he cannot learn things as easily as you. You have to help him and be patient with him. Okay?”

She is outraged. She imagines a brain, a big brain, being cut into unequal parts by her parents. She sees the large piece of brain being lowered into her head, while the small peanut size brain goes into her brother’s head. “But that’s not fair!”

They are contrite. “We didn’t know this would happen. We’re sorry. It’s not your fault; we made a mistake. Sorry. Be a good sister now.”

She is stunned. At that moment she resolves to never fight with her brother again. She will give him the biggest piece of cake, the best and juiciest bits of meat. She will let him choose his favourite toys from her Christmas stocking and let him play with whatever he wants. She will be a good sister and she will help him learn and catch up with her. She owes it to him. She understands suddenly why the same things that come so easily to her are so difficult for him to grasp. She has been given goods that don’t belong to her. Her brain is not her own; it is on loan. Whatever she has achieved, whatever she will achieve, is at his expense.

Nina C. is a writer and musician living in New York City. She can be reached at NinaCnyc@gmail.com Nina’s essay “A Letter to My Brother” can be found in Thicker than Water: Essays by adult siblings of people with disabilities http://astore.amazon.com/thesibsuppro-20/detail/1890627917.