Having A Special Needs Brother Does Not Make Me ‘Lucky’ 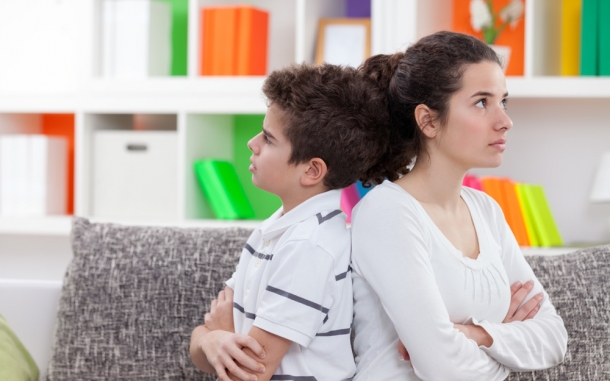 My brother is and forever will be 5 years old.

I’m not saying he’s immature. Rather, he’s a boy frozen in time. A young brain trapped in a 40-year-old man’s body.

He was born with a genetic abnormality that leads to seizures, hyperphagia (an insatiable appetite), slurred speech, violent behaviour, and severe cognitive delays. It wasn’t until his 30’s that this was diagnosed as Prader-Willi Syndrome, a rare intellectual disability caused by a faulty gene, a blip somewhere on chromosome 15. My mother suspects he has other issues as well, symptoms that cannot be wrapped neatly inside a diagnosis. He was born breech, his umbilical cord a noose around his neck. She thinks perhaps he suffered brain damage this way. He was a floppy baby. He didn’t cry.

She named him Alan. A grown-up name. A smart name. My father’s middle name. She wouldn’t ever let anyone call him “Al.”

This means that despite my being three years younger, I quickly surpassed him. I became the older sibling. The less fragile one. The “normal” one.

I was the one strangers pointed to as they consoled my mother. At least you have this beautiful, perfect little girl. Back in the ‘70s, having a disabled kid was a disease, and I was the antidote. Later, my parents had another typical child, my little brother, but even that didn’t stop their grief. Dashed hopes metastasized into resentment, lies, and rage. Dad moved out by the time I was 5.

I recently visited a friend whose newborn daughter was diagnosed with Down syndrome. Gushing and proud, she placed her gingerly in my cradled arms and draped an oxygen tube over my shoulder so it wouldn’t snag. The first six weeks of life, this baby was one shallow breath away from dying. Intestinal blockages. Fluid in the lungs. A heart defect. Surgeries. Somehow, under the watchful care of neonatal I.C.U. nurses and a mother who fed her drop after precious drop of breast milk around the clock, she pulled through. My friend brought her baby home with oxygen tanks, instruction manuals, and an infant scale to record every ounce she gained. Her fragile body was so peaceful, angelic. Even at two months old, she held my gaze in a way that implored me to love her. And, oh, how I complied. I adored her, marvelled at the amount of courage emanating from such a tiny body.

I wondered if this was how my parents had felt about my brother before things came unravelled.

The extra chromosome was unexpected, and to the mother, it appeared more as a question mark. What could she expect day-to-day? When would her baby reach major developmental milestones? Would she reach them? What would life look like for her son, the other child, the typical one?

As much as she craved a crystal ball, my friend knew I couldn’t answer most of those questions. My brother didn’t have Down syndrome. But she desperately hoped I could tell her what it was like to be a sibling to a special needs kid. “Tell me the truth: Is this a gift or a curse?”

I hesitated to respond. Truth is, I grew up with the heavy weight of responsibility, not only to make up for every one of Alan’s limitations, but to be wholly, completely un-needy. If he was the special needs kid, I had to be no needs. And then there were the tantrums, violence, neglect, financial woes, and my mother’s all-consuming depression. Do I tell her about that?

I’ve read dozens of articles and blog posts by families of special needs kids, searching for some thread of recognition, something that validates my experience. With varying degrees of transparency, parents gush about the unexpected blessing their child has been, how their patience and love has grown to envelop their son or daughter’s limitations. I’ve wept at the beauty of their stories. I believe them when they say they wouldn’t trade their experience for anything the world. For me, though, and I suspect for many “typical” siblings, that sentiment isn’t always shared.

Siblings, even normal ones, are a lesson in ambivalence. In the best of families they are rivals, competing for finite resources of attention, money, and love from parents. Teasing and resentment are as common as love, pride, adoration, and friendship. But when one of the siblings is disabled, the relationship is even more complicated. Growing up, I often felt guilty that I could do things Alan couldn’t—ride a bike, have playdates, play sports, drive, date. And I pitied myself for all the things I couldn’t do because of him. I was embarrassed when he walked in on my first slumber party completely naked. I resented the way adults expected me to protect him and care for him like I was another parent.

I recall being in grade school and a teacher telling me what a lucky little girl I was. “Your brother is special. You are so lucky to have him. He will teach you things that no other brother can.”

Looking back, my adult self knows she was right. I gained valuable insight very young: Humans are imperfect, vulnerable beings. Watching the way people behaved around my brother, I understood there is incredible kindness and unimaginable cruelty in the world. I learned that there’s no such thing as “normal” because we are all so different, each with our own weaknesses and strengths. Thanks to Alan, I did get an extra helping of patience, empathy, diplomacy, maturity, and compassion. I appreciate that. But these were gifts that were forced upon me.

As he grew, Alan became violent. Surges of testosterone overwhelmed his body faster than his mind could comprehend. He punched fast and hard. Sometimes he’d grab my arm and pull it backwards, or pick up the nearest chair and throw it at my head. All our doors were splintered. He pounded holes in the walls and shattered windows. My mother worked multiple jobs to keep us afloat, and I was left to babysit and protect my younger brother from Alan’s rage. She saw the bruises, but her response was typically that he couldn’t help it, or we’d have to work it out ourselves. I now realize she didn’t do anything because she was scared too.

As a child I couldn’t admit it, but my teacher’s words stung. Lucky?! I felt so very unlucky to be my brother’s sister. I felt small and unseen. Any problem I had, when held against the yardstick of my brother’s condition, was less significant. Any abuse I suffered was ignored or rationalized as coming with the special needs territory.

With adulthood came some relief from the violence, but a new set of problems surfaced. By 21, Alan had aged out of public special education programs. How would he spend his days? He couldn’t work. Where would he live? And, looking ahead, who would take care of him when my mother passes away?

In his early 20’s, Alan hopped on the group home merry-go-round. My mother put him on waiting lists—one, three, sometimes six years long. A spot would open up, Alan would move in, and promptly move right back home. He was usually kicked out for violent behaviour, but other times my mother withdrew him, citing some failure on the part of the staff to care for him the way she would. The way she will have to until she’s no longer able.

Late one winter night, I received a phone call. Alan had choked, gone into cardiac arrest, and was in the I.C.U struggling to breathe. His heart had stopped and been revived. Twice. The doctors were having trouble treating him because of all the medication he was on—anti-seizure pills, sedatives, antipsychotics—drugs that have coursed through his blood for decades.

Upon hearing the news, I collided head-on with my ambivalence.

I thought about the times I’ve begged my parents (both alive and healthy) to make arrangements for Alan now while they’re fully capable. I’ve explained to them that I’m no more equipped to care for him now than I was when I was 10. I’ve run every possibility through my mind, but none allow me to give him the around-the-clock care he requires. Plus, I have my own children now, and I’d never put them in harm’s way. I’ve lost hours, days, and weeks worth of sleep worrying about it. And I have to admit I’ve had a thought. This dreadful, brutal, selfish thought: It would be easier if Alan died first, more merciful somehow. That way he’ll never end up in a state institution, removed from the life he knows, robbed of his dignity.

Do I love my brother? I do, deeply. Do I fantasize about how life would be without him, without the constant dark cloud of worry? Yes, for as long as I can remember.

When I put down the phone, the walls began to sway. I was swimming in sorrow, guilt, fear. Above all, my heart ached. I wanted my brother. I wanted him to live.

I booked plane tickets and took my infant son with me to see him, leaving my daughter at home with my husband. By the time I arrived, Alan was stable, out of I.C.U. and settling in with an oxygen tank—not unlike my friend’s newborn daughter. Alan beamed when he saw me, and I was genuinely thrilled to see him too. We talked about the hospital food (he enjoyed the Jell-o). He showed me the bouquets of flowers he’d received and told me the nurses had let his dog come visit him. He played pat-a-cake with my son. My chest swelled with affection and relief.

For better or for worse, the sibling relationship endures. The truth is, I have no idea what will happen to Alan. The profound love I felt toward him in that moment didn’t cancel out our traumatic childhood; it didn’t erase the abuse and neglect. But neither did the abuse cancel out the love. I realized both could exist simultaneously. For as long as he is with us, I can have an ambivalent relationship with my brother, the way siblings do.

Gina DeMillo Wagner’s writing has appeared in several magazines including Outside, Experience Life, Wired, Backpacker, and Forbes Travel Guide. She authors a parenting blog called The Daily B and is at work on a memoir.