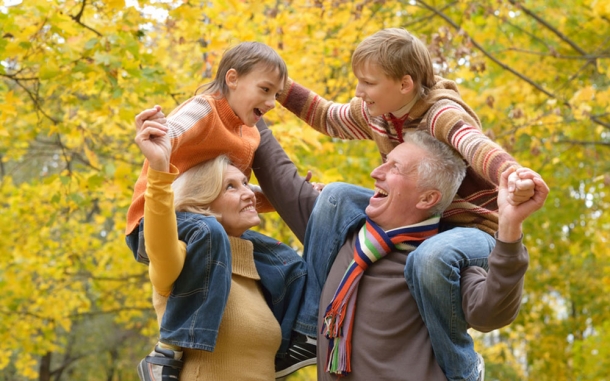 After a lifetime of hard work and worry bringing up their own children, most people look forward to relaxing and enjoying their grandchildren. When their longed-for grandchild brings sorrow as well as joy, their dreams are shattered. For your parents, your child’s condition is a double tragedy. Although they grieve for their grandchild, they may be even sadder to see their own child (you) so hurt and unhappy.

The situation can be particularly difficult for a lone grandparent. He or, more probably, she has no one with whom to share the worries or the sorrow. As a result, she may turn to you for the support she needs just when you have no energy spare to give it. If this happens to you, ask another relative or family friend to ease the demands on you by having more contact than usual with your Mum or Dad.

Being older than you, your parents were brought up at a time when disability, especially mental disability, was far less acceptable than it is today. They may never have known any disabled people and their ideas may be influenced by old wives’ tales and other misinformation. As a result they may take longer then you to accept what has happened.

Unlike you, they are not in the front line of child care so it’s easier for them to opt out of the problem by opting out of contact with your child. Alternatively, they may try to deny the diagnosis, especially if your child appears normal. They may insist his learning difficulties are just normal slowness or that his cystic fibrosis is only chestiness which he will outgrow. Worse still, they may insist his problems are all your fault - that all would be well if only you followed their advice.

All these reactions usually improve with time as your parents work through their grief - having trouble coping initially does not mean they will never be supportive. Give them as much information as you can about your child’s problems and how they can be helped. Leaflets are particularly useful as your parents can read them many times if necessary, instead of asking you to keep repeating facts and explanations. Remember they need to understand the situation before they can cope with it. Even if they opt out of visiting, continue to write or phone with news of their grandchild, stressing the positive side if you can.

If your parents hurt you by thoughtless comments or behaviour in those early weeks, try not to hold it against them for the rest of their lives. Even if the situation does not improve, try to feel sorrow at their inability to cope rather than anger at their reactions. Don’t feel guilty either. If they can’t face what has happened, it’s their problem not yours.

Grandparents seem more worried than anyone else about “why it happened” and are particularly prone to make comments like “There’s never been anything like that before in OUR side of the family”. Perhaps they feel an inner need to prove the situation is not their fault. This can be even more pronounced if your child’s condition is inherited. Then they may blame your father’s Uncle George who had a nasty cough or his Cousin Mildred who they always did think looked a little odd. If all this talk of blame upsets you, try ignoring the comments so such conversations die in their early stages. If that fails, just state firmly “I don’t care where the problem came from so I would rather not discuss it” and stand by what you have said.

I am sure it eased your feelings of helplessness to know there were ways you could help your child. Similarly your parents may welcome suggestions on how to help you. Apart from obvious ideas like baby-sitting, they may enjoy practical tasks like altering clothes to fit your non-standard shape child and making or adapting special toys or furniture.

Encourage both sets of grandparents to learn any special care skills or exercises your child needs so they feel confident enough to look after him themselves sometimes. As well as giving you a break, it will allow him to build the same close relationship with his grandparents that he would have had in the ordinary way.

Two major sources of friction with grandparents are discipline and sweets. They tend to provide too little of the former and too many of the latter. Don’t kid yourself that you have this problem because your child is disabled or sick. It is universal to all families and you will probably be as bad yourself if you ever have grandchildren. On the other hand, your child’s problems may heighten the tension if they mean that too little discipline or too many sweets are extra serious.

If your parents live a long way away so you only see them infrequently, you may decide to just grin and bear it while you are with them. Otherwise it’s best to say how you feel early on and clear the air, rather than go on becoming more and more annoyed until you finally explode. It may be worth considering a compromise solution such as sweets once a week rather than no sweets at all. You could also suggest more acceptable treats such as favourite foods, comics or bubble liquid.

As time goes by

Supportive grandparents are worth their weight in gold, but they are older than you. As time goes by, they will age and your child will grow taller and heavier. There may come a time when, however willing they are, they will not be able to give as much practical help as they did before. For that reason it’s not a good idea to let them become your sole source of help.

As your parents become less able physically, suggest other ways they can help so they still feel useful. Elderly, retired grandparents may not be able to lift a heavy child on and off the toilet but they still have plenty of that valuable commodity, time: time to play a game over and over, time to repeat exercises and time to listen. Together parents and grandparents can make a very good team.

A Special Child in the Family was the first book I ever wrote. I learned a lot in the process - about special children, their families and the people who work with them.