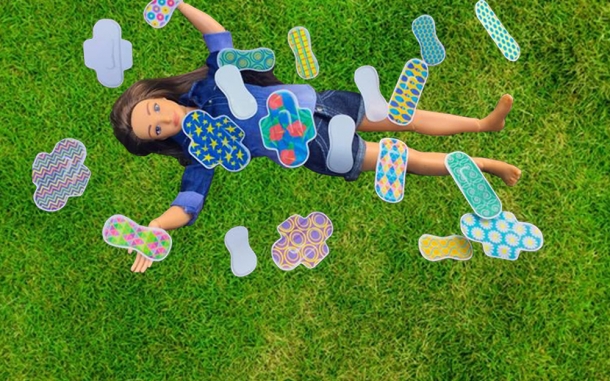 My daughter is twelve.   She has a severe developmental delay, due to her autism.
If you ask me, she’s brilliant, but communication is very difficult. Explaining complicated ideas is VERY difficult.

You know what’s complicated to explain? Menstruation.
Follow me past the fleur de kos, if you’re brave and comfortable discussing icky stuff.

I knew this was coming. There has been some new hair in the past six months, and she’s at that age. They have programs at schools starting in 6th grade to teach the kids about these issues with pictures and icons. As you can imagine, some of the icons are pretty hilarious. I’m not sure how effective they are preparing these kids for what is to come, especially the girls.

I haven’t done much to prepare her myself. I was getting there, I swear. I kept saying to myself, “She’s only twelve”. When I used that excuse to explain my delay, my husband pointed out that she’ll be thirteen in two months. She’s pretty much thirteen, which sounds dramatically different in my mind from twelve. Twelve is “still time”, thirteen is “time to panic”.

We were out to eat today, walking around the charming town square after our meal, when I noticed a little stain at the back of my daughter’s pants. Oops, I thought, she must have not wiped very well. It was my fourteen year old son who had to clue me in to what was really going on. Talk about denial. “Mama, that looks like--you know.”

Three days ago I was at the market and on a whim I bought some sanitary napkins. I was going to start practicing with her this weekend. I really was. I know that with development delays you can’t just spring things, you need good lead time and lots of physical practice. This is what they look like. This is what you do. This is what will happen. You keep it simple and concrete.

Fate intervened and ruined my plans. So instead of calm practice, I had a bawling, tantruming girl on my hands. She kept saying, “diapers” and “baby”.
“No,” I kept saying, “It’s not for a baby, it’s for a grown up. It’s not a diaper. It’s just to help keep you clean”.

“Clean up! Clean up!” She was yelling and crying. She kept tearing the sanitary napkin out of her pants and throwing it on the ground. I felt like the worst mother ever.
I left her with my husband and ran to the market. I got about seven different brands, thicknesses, lengths and shapes. I also got a lot of ice cream. Cookies and cream, her favourite, mint chocolate chip, my favourite, and red velvet cake, which just sounded really good.

When I got home my husband looked frazzled and shook his head. “She won’t keep it on,” he said. I was hit with a small spark of inspiration and went in the bedroom, “Look, it’s for grownups, grownups use it, too.” I put one on myself in front of her.
She laughed. “See?” I said. “One for mama, one for you!”
She let me put it on her and seemed happier. When she came out of the bedroom later, I said, “I have mine on! Do you have yours on?” We checked, and it was still there.

This is day one.  I can’t claim any success yet, but at least she’s not bawling and she seems to be keeping the napkin on.

I could go into the whole separate issue of birth control pills which will put halt to any menstruation at all. The paediatrician seems to think it’s a fine idea, but I am far from convinced. It’s easy to be opposed to something like that in theory, though. I’m sure in six months I’ll be begging the doctor for it. I just don’t know what to think.

Welcome to EllieCastellanos.com. This website was created to display the art of Ellie Castellanos. Ellie is a fourteen year old artist with autism. Autism interferes with her ability to communicate with the world at large, but she's found an ingenious workaround: art. Over the years we've gotten to know Ellie so much better through her artwork than we have in any other way