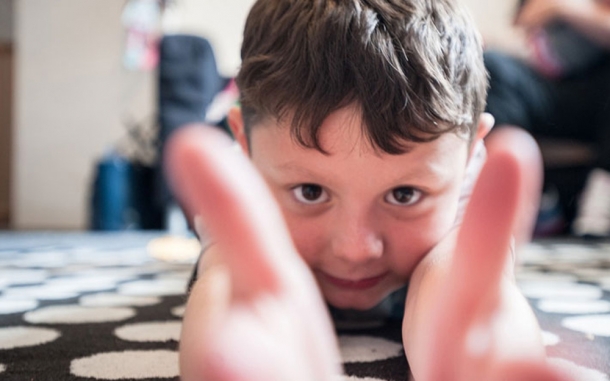 Fourteen-year-old James can remember back to when he was still in his stroller and became overwhelmed by loud, chaotic environments like malls and theme parks. “I sucked my thumb, curled up and ignored it,” he says. His mother, Trish, elaborates, explaining that he would hide and fall asleep: “The louder it was, the faster he would fall asleep.”

As James got older, he would run to another room to get away from things that overstimulated him. He bolted in public. “For safety reasons,” Trish says, “we stopped taking him out to crowded places.” He would also melt down in “safe places” like the car, school and home.

These behaviours are associated with sensory processing issues, as a child, his sensory issues were very impairing. But as a teenager, they’re much less severe. While his issues now “make it a bit more difficult to live my life, “ James says, “it’s nothing super major.”

“In the majority of people, sensory issues resolve on their own, or become significantly milder and less interfering as a child grows,” explains Wendy Nash, MD, a child and adolescent psychiatrist at the Child Mind Institute.

Dr. Nash, who has treated many children with autism, adds that sensory issues associated with autism tend to last longer. “When they’re part of another diagnosis, which is often the case for more severe sensory problems,” she says, “the sensitivities can continue, but also show improvement.”

Parents, teenagers and adults on the spectrum also report that skills learned in occupational therapy and environmental accommodations have helped limit the impact of sensory issues as they got older.

What are sensory processing issues?

Kids like James have trouble processing the information they take in through their five senses — sound, touch, taste, sight and smell — as well as two lesser-known internal senses that involve body awareness (proprioception) and movement, balance and coordination (vestibular sense).

Some children are overly sensitive to sensory input, which becomes overwhelming, and leads to avoidance. Some are undersensitive, which leads kids to intentionally bump into things (and people) and seek out more sensory stimulation. And some can be both, which can lead to seeking and avoiding different kinds of stimulation.

Like many kids today with sensory issues, James received occupational therapy; he went from the time he was 2 until he was 8. Trish says the OT who worked with James as a toddler used a lot of swinging, spinning and deep pressure to calm him down. OTs also work on gross and fine motor skills affected by vestibular and proprioceptive systems. She reports that he was much calmer after these sessions.

Hartley Steiner’s son Gabe, a 16-year-old with sensory processing issues, also did OT, from age 4 through eighth grade. Steiner says her son is also a lot better now. “I think the years of therapy, and the education that comes with that, made his sensory issues manageable,” she says.

Along with providing sensory gyms, most OTs work in schools and consult on accommodations for kids. OT Lori Rothman says she looks for ways to help a child regulate within the classroom environment. She says providing pillows to sit on, weighted vests, breathing exercises (including blowing into a soundless whistle) and fidgets can offer input that make kids feel more in control of their bodies.

Continuing to use coping skills

Teenagers and adults report continuing to use compensatory tools learned in OT.

Things like swinging continue to help James, who has a sling-type swing he spins in down in his basement. He says he doesn’t use it regularly but “I have it when I need it,” usually when he has too much energy he needs to expend. When he’s anxious, he prefers deep pressure. He gets it from “this ginormous bean bag. I put it on top of me and I have someone sit on it,” explaining that it’s fluffy and doesn’t hurt.

Trish adds that he also sleeps with a weighted blanket, drinks through a straw (a socially appropriate form of sucking, versus using his thumb), chews gum, dons headphones in noisy public spaces, and has a lot of fidget toys.

James has also learned to avoid certain potentially overwhelming situations, whether it’s because he knows the sensory input will be too much for him or he’s already stressed out, say from a long day at school. When he can’t, he tries to come up with a Plan B. For instance, he’ll scope out a place to retreat to if he it all becomes too much for him. He also still has some intense food sensitivities but those are getting better, too, thanks to behavioral therapy.

As for Gabe, Steiner says OT also gave her son a better understanding of how to appropriately help himself. Instead of crashing into someone, he learned to use a heavy blanket, ask for a squeeze or do some isometric exercises.

Doing push-ups and crab walking are still favorite ways of regulating his body. And all outdoor activities help; these include walking, biking, skateboarding and his favorite, swimming, when the weather permits, Steiner says. “When the weather is bad,” she adds, “he uses the shower for water input.”

How maturing can help

Kids can also be motivated to tolerate their sensory discomfort as they grow older.

“I think maturing does make a big difference, or at least it did for Gabe,” Steiner says. “Becoming more self-aware, realizing certain behaviors aren’t socially appropriate, or just really wanting something like attending a birthday party at a chaotic location have all pushed him to cope, or perhaps tolerate, the distress for longer.”

Steiner says Gabe hasn’t been “cured” of his sensory issues, “he’s just better at managing them at 16 than he was at 4, or 12 for that matter.”

James agrees, but adds that it still keeps him from huge crowds or very loud situations. “It limits what I can do.”

Alice Brandwein, PhD, a neuropsychologist at the Child Mind Institute, says we shouldn’t discount teenagers may have also matured neurologically. “I don’t think it’s only an issue of people learning to compensate or to manage,” she says. “There are typical neurodevelopmental processes that happen across childhood that do lead to behavioral changes.”

Dr. Brandwein adds that those processes “go at a different pace for different children,” and could be one explanation for perceived improvements.

This isn’t to say that everyone with sensory issues gets better. Shannon Des Roches Rosa, a senior editor at Thinking Person’s Guide to Autism, reports, “We hear from a lot of adults in our community that their sensory sensitivities actually don’t go away and that, coupled with people’s intolerance and refusal to accommodate for sensory issues, it gets worse for many, to the point where some essentially become sensory recluses.”

Adds Nancy Peske, coauthor of Raising a Sensory Smart Child, “Different senses are more problematic as you get further toward adulthood. Visual/auditory demands are greater in school than they were when [we were kids.] Technology helps, but reading black on white print, in books? Listening to ‘sage on the stage’ lectures? That can be so hard!”

But many adults on the autism spectrum report that while sensory issues haven’t disappeared, they’ve gotten more manageable as they have figured out how to adapt.

The three have landed on similar ways to compensate, be it dark curtains and glasses, no ticking clocks and/or soft clothing. “For me, it’s been coping mechanisms,” says Malia, an English professor at Norfolk State University.

The adults also avoid triggers such as crowds and loud noise. If Johansson can’t do this, he says, “I usually try to ignore it as much as possible by paying attention to other things, like my smartphone.” He also shops mostly online. “If I go to a store and browse,” he says, “I will suddenly lose my ability to focus my eyes. Everything will go blurry and I will not even be able to see my own hands clearly. When that happens, I will have to stop and look down at something on the floor for a few minutes until my eyesight returns.”

“I’ve been compensating for my sensory issues for so long that I don’t even realize I’m making accommodations for myself,” Malia says. “I know my limits, and I do my best to keep myself from sensory overload. But even as an adult, I have occasional autistic meltdowns, normally brought on by sensory issues.”

All have also learned to stand up for themselves. Swearman will ask for changes whenever they can happen easily, like lowering the volume of music or asking her group to change seats. The three have also become profoundly aware how much stress can heighten their sensory issues. “If I’m stressed, the sensory overload is much more noticeable and everything seems brighter, louder and more painful,” Swearman says.

Johansson adds, “Anxiety feeds sensory issues. Sensory issues feed anxiety. Everything becomes a vicious circle. I must minimize stressors that cause anxiety and sensory issues at the same time.”

Malia’s answer is exercise: “If I don’t exercise enough, I end up getting easily stressed,” she says, and is less able to tolerate sensory challenges.

Whether sensory issues continue into adulthood or not, the good news is that between neurological development and compensatory skills, they have less impact on functioning, and both teens and adults report more success in managing them.