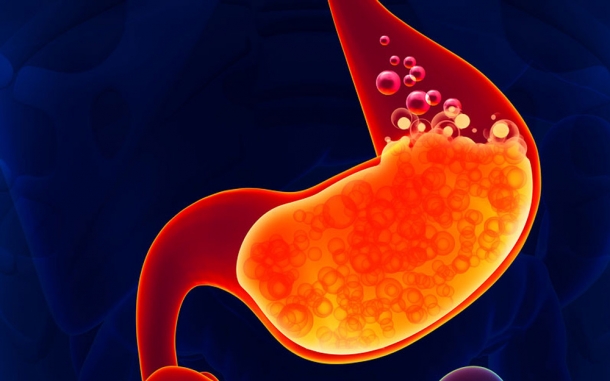 At one time or another, many adults have had heartburn (an uncomfortable feeling in the chest) after eating a big meal or spicy foods.

When these symptoms happen often or aren't tied to certain ingredients, they might be due to gastroesophageal reflux (GER), also called reflux.

But GER isn't just a problem for adults — kids can have it, too, even babies. In infants, it can cause vomiting and fussiness after feeding. And in older kids and teens, GER can lead to heartburn, and stomach and chest discomfort.

Most kids outgrow GER over time but some will need medical treatment. Reflux that causes problems like poor growth, vomiting, or damage to the esophagus is called GERD (gastroesophageal reflux disease). GERD is more serious than GER and is usually treated with medicine.

The burping, heartburn, and spitting up associated with GER are the result of acidic stomach contents moving backward into the esophagus. This can happen because the muscle that connects the esophagus to the stomach (the esophageal sphincter) relaxes at the wrong time or doesn't properly close.

Many people have reflux regularly and it's not usually a cause for concern. But with GER, reflux happens more often and causes noticeable discomfort. After nearly all meals, GER causes heartburn (also known as acid indigestion), which feels like a burning sensation in the chest, neck, and throat.

In babies with GER, breast milk or formula regularly refluxes into the esophagus, and sometimes out of the mouth. Sometimes babies regurgitate forcefully or have "wet burps." Most babies outgrow GER between the time they are 1 or 2 years old.

But in some cases, GER symptoms last. Kids with developmental or neurological conditions, such as cerebral palsy, are more at risk for GER and can have more severe, lasting symptoms.

Heartburn is the most common symptom of GER in kids and teens. It can last up to 2 hours and tends to be worse after meals. In babies and young children, GER can lead to problems during and after feeding, including:
• Frequent regurgitation or vomiting, especially after meals
• Choking or wheezing (if the contents of the reflux get into the windpipe and lungs)
• Wet burps or wet hiccups
• Spitting up that continues beyond a child's first birthday (when it stops for most babies)
• Irritability or inconsolable crying after eating
• Refusing to eat or eating only small amounts
• Failure to gain weight

Some of these symptoms may become worse if a child lies down or is placed in a car seat after a meal.

Some children develop complications from GER. The constant reflux of stomach acid can lead to:
• Breathing problems (if the stomach contents enter the trachea, lungs, or nose)
• Redness and irritation in the esophagus, a condition called esophagitis
• Bleeding in the esophagus
• Scar tissue in the esophagus, which can make swallowing difficult

Because these complications can make eating painful, GER can interfere with proper nutrition. So if your child isn't gaining weight as expected or is losing weight, it's important to talk with your doctor.

In older kids, doctors usually diagnose reflux by doing a physical exam and hearing about the symptoms. Try to keep track of the foods that seem to bring on symptoms in your child — this information can help the doctor determine what's causing the problem.

In younger children and babies, doctors might run these tests to diagnose GER or rule out other problems:
Barium swallow.
This is a special X-ray that can show the refluxing of liquid into the esophagus, any irritation in the esophagus, and abnormalities in the upper digestive tract. For the test, your child must swallow a small amount of a chalky liquid (barium). This liquid appears on the X-ray and shows the swallowing process.

24-hour impedance-probe study.
This is considered the most accurate way to detect reflux and the number of reflux episodes. A thin, flexible tube is placed through the nose into the esophagus. The tip rests just above the esophageal sphincter to monitor the acid levels in the esophagus and to detect any reflux.

Milk scans.
This series of X-ray scans tracks a special liquid as a child swallows it. The scans can show whether the stomach is slow to empty liquids and whether the refluxed liquid is being inhaled into the lungs.

Upper endoscopy
In this test, doctors directly look at the esophagus, stomach, and a portion of the small intestines using a tiny fiber-optic camera. During the procedure, doctors also may biopsy (take a small sample of) the lining of the esophagus to rule out other problems and see whether GER is causing other complications.

Treating GER
Treatment for GER depends on the type and severity of the symptoms.
In babies, doctors sometimes suggest thickening the formula or breast milk with up to 1 tablespoon of oat cereal to reduce reflux. Making sure the baby is in a vertical position (seated or held upright) during feedings can also help.

Doctors may recommend raising the head of a child's bed 6 to 8 inches to minimize reflux that happens at night. They also may try to address other conditions that can contribute to GER symptoms, including obesity and certain medicines — and in teens, smoking and alcohol use.

If these measures don't help relieve the symptoms, the doctor may also prescribe medicine, such as H2 blockers, which can help block the production of stomach acid, or proton pump inhibitors, which reduce the amount of acid the stomach produces.

In rare cases, when medical treatment alone doesn't help and a child is failing to grow or develops other complications, a surgical procedure called fundoplication might be an option. This involves creating a valve at the top of the stomach by wrapping a portion of the stomach around the esophagus.

If your child has GER symptoms, talk with your doctor. With proper diagnosis and treatment, kids can get relief and avoid longer-term health problems.