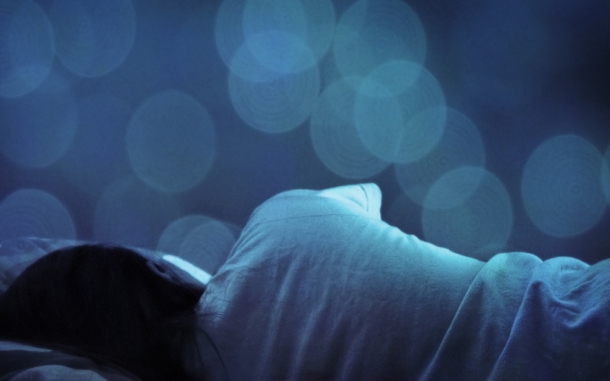 Sleep tight: We had 12 years of Andrew waking during the night.  A health professional suggested we wrap a quilt cover over the bed and tuck it in tightly either side under the mattress, so his bedding doesn't come off, and he feels snug and tightly tucked in. It worked instantly, and he has slept better ever since.

Back to front: Put footless all-in-one sleep suits on back to front to stop nappy escapologists/ diggers at night.

Night wanders: My daughter wanders during the night, and has set the burglar alarm off many times. We bought a cheap plastic door hook to go over the top of her door and put a mobile that jangles on it. It has never failed us. We use this in conjunction with a baby alarm. Much better than the expensive laser equipment we tried, which went off every time she moved her duvet!

Sleep sac: If your children toss and turn a lot, which means blankets don't stay on, a sleep sac is invaluable. You may want to continue using one well after the usual age as it keeps them warm and helps avoid chest infections.

Night panics: Our son was having panics at night. We got him an ipod but were worried about the headphone wires. We've now found an amazing Mp3 Pillow at Argos. A speaker is buried in the pillow with a lead safely in the corner.He has his old headhead phones to chew on if he wants and we are no longer buying a new pair every other day. Great for the car too!

Home & away: I keep a lavendar sachet inside my son’s pillow case so that whenever he goes to respite his bed clothes smell the same as at home. I found it helps him to settle and I think it comforts him when he is away from home at night.

Towels & teddy bears for support: When positioning your child at night, have a look in the airing cupboard - spare cushions, pillows, towels and teddy bears will often do a great job of supporting your child in bed.

Take turns: We take it in turns to get up during the night. We found that it is important for at least one of us to get a full night's sleep.

Tape your own voice: I taped myself reading several of Beth’s favourite stories, so she could listen to my voice after I had left her bedroom.

Keeping it together: My son has problems with picking at his nappy/pull ups/pads in bed, so I put press studs on pyjamas so the top and bottom fit together.

Nap time: Keep any naps during the day short and not too near bed time. It should become part of a routine and as early on in the afternoon as possible.

Make it familiar: Ben behaves differently in respite care when he is trying to get to sleep. Now he takes his own pillow or at least a pillowcase I have washed at home. Washing powders have very different smells and it was the smell of the sheets and pillow that was putting him off sleeping.

Comforter: Buy a ‘brave girl/boy’ soft toy which you can get out when you have a babysitter.

Rock it: We were given a baby rocking chair for Ashley which worked brilliantly so when he got older we bought a maternity rocking chair which he could sit in and fall asleep.

Star struck: We stuck dozens of fluorescent stars and moons on Beth’s ceiling, and when the lights were off, the whole room was aglow. She would often lie mesmerised by the effect until she fell asleep.

Shut the stable door: We have a stable door on Zoe’s bedroom to keep her safe so that when we check on her at night we don’t wake her up.

Projector: Max absolutely would not stay in bed. In the end we bought him a DVD projector and screen, which he now falls asleep to. We used to be so against this but in the end needs must!

Colours: Try painting the bedroom in calming colours. Blues and greens are known to be great colours for relaxation.  Studies show that blue is the best colour for sleep, as it actually induces sleep-time horomones.

Love my room: Don’t use the bedroom as a place for punishment. You only want to have positive feeling associated with the bedroom.

Calming pressure: We find using a heavy blanket, a sleeping bag, and/or encouraging Tom to hug a pillow are all calming.  The deep touch pressure suits his sensory needs.

Less space: We make a tighter cosier space for Chelsea by surrounding her with pillows to make her bed snug.

Masssage: For relaxation try a foot, hand, scalp or body massage (use massage oil mixed with a couple of drops of essential oils for the smell, essential oils are way too strong on their own), it's very soothing and relaxing and great before bed-time. You can experiment with different pressures depending on sensory needs.