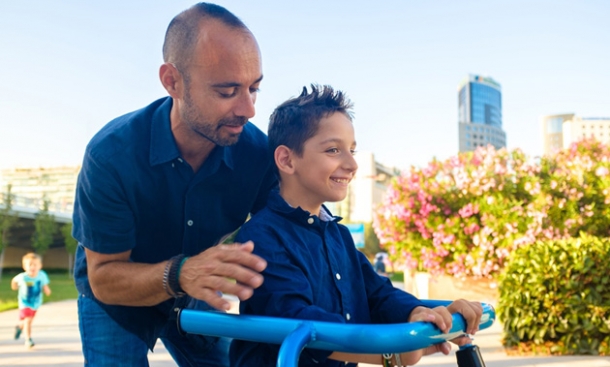 I’ve had these thoughts for a long time. Once, they actually did escape my mind during a situation when I was asked what it is like to be a dad of a child with a degenerative condition.

From a dad’s point of view – my wife would say that this sucks. Yea I’d agree, but… There is not one word or single thought after seven years that would sum up what is in my head. Yes it sucks to be told, “…taker her home and enjoy her for she will only live to 4 or so years”… Yea that’s what our neurologist said on our June 7th, 1999, 11:00am appointment. You all know what I mean, where were you when Challenger blew up or when 9-11 happened, or when you got your diagnosis. That was the death of my dreams, but I did not know it then.

Seven years ago, I had it fairly good. We had a double income, and we were just 3 steps away from climbing out of the hole. I could see the edge and we had it all. I had hopes and dreams. Not just personally, but professionally too. I was at the cusp of looking for that next big thing. It was either going to be a holiday home, or investment property, or a boat… but it was going to be something.

It wasn’t like the catastrophic dam breaking, not at first; it was more like an internal pop. Nothing much at first, just a crack here, a leak there, but it foretold of a huge disaster. That was 7 years ago. Since 1999, I have held four positions and a 9-month unemployment stint. Has this affected my career? You tell me. I have had managers that have told me that if they heard any more about my child, her disability or her disease, I’ll be put on disciplinary action. I have had managers that have been the single largest contributor at a fundraising event. I am also at the same basic career level that I was at June 7, 1999.

Watching your friends both professional and personal climb up the ladder is hard. Watching your wife loose her career is even harder. She had it all, and when she was climbing the ladder, I saw things for her were great!

The crack is the dam gets bigger.

As the months go by, early intervention comes and go, and things are still status quo. The 3 month maternity leave becomes 3 years, then 5, and finally at 6 years, we are finally at a point where Sherri was starting to think that she can go back to work. The first time, it’s great, a position where she can work part-time, but would you know it, that’s the year where the snow didn’t stop and there were five no school days or delay days. When our daughter, Ray Ray, had a grand mal seizure, wouldn’t you know it, the college where Sherri was employed misses the boat of family compassion and fires my wife.

The dam continues to leak, the cracks get even bigger, and the rumbling starts.

Yes, I’m angry. Yes, I’m frustrated. Yes, I’m a lot of things but as a father how can I not stop. I’m the dad… the provider.

Someone once said or mentioned “black thoughts”… wow, if that statement is not all encompassing. I have had black thoughts! About a lot of things! But they have always been, and will always be, just thoughts.